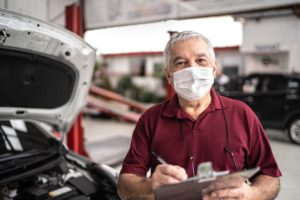 A survey of vehicle service and repair businesses by The Motor Ombudsman showed that the majority (73%) of respondents are expecting MOT volumes in March and September to be similar or fewer in number than the same period last year. Demand for the mandatory annual test is traditionally at its highest during these two months, mirroring the bi-annual plate changes for new cars.

Data released by the Driver and Vehicle Standards Agency (DVSA) forecast that 3.49 million MOTs are set to expire in March, equating to only 152,000 more than the same month in a ‘regular’ year. While this is an increase, and when spread across all MOT stations, it reflects the opinion stated by 39% of those polled that volumes will remain largely unchanged for the two typically busiest months for MOTs in 2021.

Whilst there was no clear consensus on the average mileage that businesses thought consumers would be completing since their last MOT in 2020, the most popular view of those surveyed by The Motor Ombudsman was that they estimate it to be in the range of three to five thousand. This equates to a relatively steep drop in the distance travelled by motorists when compared to an annual average of 7,200 miles in 2019 for private vehicles, according to the Department for Transport’s National Traffic Survey.

Another projection revealed by the study was that more than half (58%) of service and repair businesses think that there will be a larger number of MOT failures this year than in 2020. This is on the assumption that consumers may have been more hesitant to take their car to a garage for routine maintenance and repairs since the start of the pandemic.

Commenting on the findings of the study, Bill Fennell, Chief Ombudsman and Managing Director of The Motor Ombudsman, said: “The research offers an interesting insight from those businesses that are ‘on the ground’ conducting the MOT tests. It is encouraging to see that the majority estimate that MOT volumes will hold up during the peak months, but there is equally an element of concern that demand may also be lower than March and September last year. There will also undoubtedly be more challenging periods for businesses in between, such as in April and May, due to the knock-on effect of motorists using the government’s six-month MOT extension introduced in response to the pandemic.”

Bill added: “Even if consumers have done less mileage in the 12 months leading up to their MOT, and with more test failures on the horizon, as our study has shown, it remains crucial for vehicle owners to sign up for the free MOT reminders and get the test completed on time or earlier to avoid compromising their own safety, and that of others when on the road.”