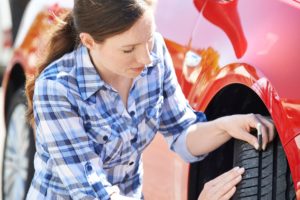 With many holidaymakers set to hit the road across the country for their summer staycation, a recent online YouGov study of 1,496 UK car users commissioned by The Motor Ombudsman to mark the launch of its “Have the right atyre” tyre safety awareness campaign on social media, has revealed that over three quarters (77%) of respondents would personally check or have someone in their household examine the condition of their vehicle’s tyres prior to setting off on a vacation.

From these individuals who said that tyres would be looked at before hitting the road, over half (55%) would make sure they were safe and legal the day prior to going on holiday, whilst more than a quarter (27%) said that they would look down at their tyres a week before they were due to leave. Just 14% would put it off until the very last minute, namely the departure day itself. The research showed that, for the people who would perform tyre checks, those aged over 45, and individuals living in Wales and the South are the most likely to want the peace of mind that this vital safety component was all in order prior to driving (an average of 82% of respondents in these three groups).

When asked about what factors survey participants would take into account if they needed to buy brand new tyres for their vehicle, 49% said that they would choose them based on the budget they had available. Just under a third (32%) explained that they would make a purchase following a recommendation by a mechanic, with 30% of individuals stating that their decision would be based on the level of grip offered in different weather conditions. In addition, a quarter would go with the same make of tyre that was already fitted to their car, whereas just under a fifth of people (17%) would rely on customer reviews or follow the advice of a friend or family member (16%). In fact, male car users would be the least likely to leave the decision down to the actual person changing the tyres (8%), whereas female drivers have the exterior noise level of the tyre at the very bottom of their priority list (just 5%).

The survey highlighted another encouraging statistic in that over half (54%) of car users were up to speed with the meaning of tyre sidewall markings, which is another important aspect of tyre maintenance that is being emphasised as part of the campaign. The poll showed that those over the age of 35 (56%) are the most au fait with what the writing on the side of a tyre signifies, with those living in the East of England also being amongst the most knowledgeable on the markings (62%) compared to individuals residing in other UK regions.

Bill Fennell, Chief Ombudsman and Managing Director of the Motor Ombudsman, said: “It is pleasing to see from the survey results that there is a very high proportion of car users that would look at the condition of their tyres before heading off on their summer staycation. This is especially reassuring due to the fact that tyres play a key role in providing grip, stopping performance, reducing road noise and improving ride quality. Spending time carrying out the vital checks, such as fluids and tyres, can make all the difference in ensuring you get from A to B as quickly and as safely as possible. If people are unsure as to what to look out for, or if they spot something on their tyre that may be of concern, it is important that they visit a Motor Ombudsman-accredited business. This is to allow a mechanic to cast a qualified eye over the vehicle to ensure that everything is as it should be prior to embarking on a journey to their holiday destination.” 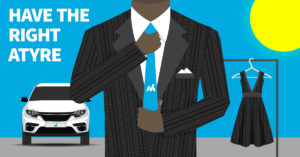 As part of the two-month-long “Have the right atyre” awareness campaign, The Motor Ombudsman will be publishing eye-catching attire-themed images and animations on its Twitter and Facebook pages, and website (TheMotorOmbudsman.org), to communicate key messages and tips around tyre maintenance and safety. For more information, visit TheMotorOmbudsman.org/RightAtyre.