A poll by The Motor Ombudsman on the challenges faced by independent garages and franchise dealer workshops during the first six months of 2022, has shown that increasing operational costs have proved the biggest concern for 79% of businesses since January. The same proportion of respondents also stated that their bottom line had been particularly affected by the significant jump in energy and fuel prices, which continue to climb to record highs.

Delays getting hold of replacement parts were cited as the second largest obstacle for garages and workshops, negatively impacting around three quarters (72%) of businesses that took part in the mid-year research by the Ombudsman for the automotive sector. Furthermore, with the widely-reported hike in the cost of living affecting households across the country, and inflation recently hitting its highest level in 40 years, 71% of garages and workshops reported they had seen motorists reduce their spending on ad hoc and routine vehicle maintenance and repairs when compared to the first six months of last year.

When these businesses were questioned about what car owners had specifically forgone since the start of 2022 when it came to vehicle maintenance, nine in ten (91%) said that motorists had cut back on taking their car in for its annual service. This confirms the behaviour highlighted in The Motor Ombudsman’s survey in March, regarding consumer spending on servicing during 2022.

Similarly, over half of businesses (58%) said that demand had dropped for the topping-up of fluids, such as oil and air conditioning coolant, with 55% reporting a fall in bookings for the replacement of wear and tear components, namely tyres, brake discs and wiper blades, when compared to the volume witnessed between January and June 2021.

Weeks with quieter MOT demand, due to the changes in the level of customer footfall throughout the year – a knock-on effect of the MOT extension in 2020, was seen as a hurdle for around half of respondents (51%) overall in the opening six months of 2022. For 33% of workshops and garages polled, this was compounded by a reduction in vehicle throughput due to ongoing car supply issues. Encouragingly however, in a sector where experienced labour is in relatively short supply, only 21% of poll participants stated that they had incurred staff absences due to COVID-19, a marked decrease on the 50% figure recorded in The Motor Ombudsman’s 2021 end-of-year survey.

When businesses were asked to comment on the expected outlook for the remainder of 2022, the recurring themes were a trading environment dominated by rising costs, a diminished pool of qualified technicians to recruit from, coupled with increased salary demands, and customers putting off routine repairs due to having less disposable income.

In light of their view of the months ahead, around six in ten (63%) survey respondents said that they would be looking to increase prices to remain profitable in the face of higher overheads. With a difficulty to take on more staff, and the importance of retaining skilled technicians, nearly half (45%) of garages and workshops explained that they would be training more of their mechanics in the repair and servicing of electric and hybrid vehicles.

In addition, 40% of businesses that took part in the study said they would be raising salaries during the next six months to help team members cope with the hike in the cost of living, with a third (34%) of organisations aiming to plug the staffing gap by taking on new apprentices. In a bid to boost footfall during a challenging period, 33% plan to put in place marketing initiatives to attract new customers, and enhance their online presence.

Bill Fennell, Chief Ombudsman and Managing Director of The Motor Ombudsman, said: “Our research has shown that garages and workshops in the service and repair sector have had to manage a multitude of financial and economic challenges so far this year.”

Bill added: “With the outlook for the next six months continuing to look difficult, it is unsurprising that service and repair business owners are looking to raise prices to maintain profitability and support staff salaries. This of course all comes during a period when households, which are already under a financial strain, are set to experience even greater pressure from increasing energy costs before year-end, with vehicle maintenance, as shown in our March survey, taking even more of a back seat for many.”

To view the businesses that are accredited to The Motor Ombudsman’s Service and Repair Code, visit www.TheMotorOmbudsman.org/Garage-Finder.

The survey of independent garages and franchise workshops was conducted online by The Motor Ombudsman between 14th to 24th June 2022.

Highlights of the results of The Motor Ombudsman’s summer survey 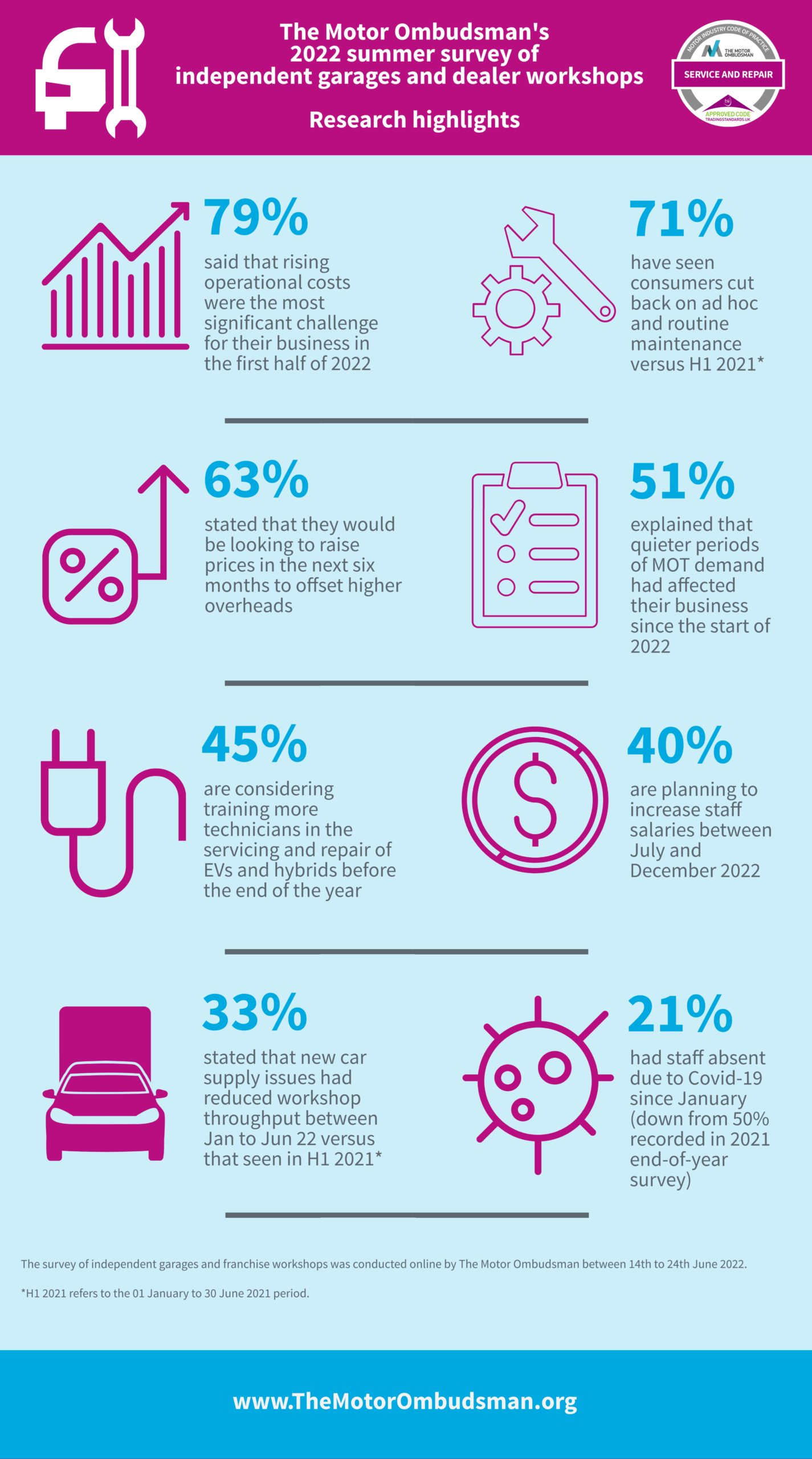