The Motor Ombudsman looks at the principal causes of disputes brought by consumers in relation to the purchase of an electric or hybrid vehicle during the first six months of 2022.

Customer service issues encountered at the point of sale or following the purchase of an electric (EV) or hybrid vehicle, drove the largest number of consumers to log their dispute with The Motor Ombudsman in relation to these types of cars during the first six months of 2022.

The latest data shows that one in four EV owners who had a complaint (40%) were unhappy with an element of their experience provided by a retailer between January and June 2022, whilst a third of hybrid customers (33%) also expressed discontent with an aspect of the service they received.

Repeated delays in the delivery of a new EV and hybrid car beyond the original date stated by the seller at the time or ordering, and missing in-car features, which resulted in a lower grade of specification at the point of handover – principally because of the widely-publicised shortage of semi-conductor chips, were two prominent reasons for consumers bringing their sales dispute to The Motor Ombudsman in the first half of this year.

Other customer complaints pertaining to the supply of a brand new electric car by a business, resulted from retailers not registering the vehicle in time to take advantage of the government plug-in grant scheme, cancelling subscription contracts at short notice, and high-pressure selling techniques.

Customer service concerns about used hybrids emanated principally from there being increased mileage on the clock between test driving and collecting the vehicle, and not being provided with a courtesy car by a business following a mechanical breakdown.

Driving the second highest proportion of customer complaints about EVs were electrical and software problems (16%), with new vehicles suffering from app failures and software downloads not working, thereby preventing the use of in-car equipment. Voice commands, keyless entry and the collision warning system not functioning correctly were also examples of issues reported with new cars.

The next biggest volume of disputes about hybrids after customer service, originated from faults falling under The Motor Ombudsman’s chassis and engine category (29%). For new cars, these were centered around vehicles not shifting into gear, the spare wheel and retractable towbars missing on the handover of the vehicle, seizing handbrakes, and puddles of water developing in the driver floor well. For used cars, customers encountered problems with broken wheel rims, clutch issues, and excessive oil consumption.

Rounding off the top three most common complaints about EVs originated from chassis and braking issues (15%), namely brake pump failures for new cars, with second-hand models causing customer dissatisfaction due to premature tyre wear. For hybrids, disputes stemming from problems relating to the interior of the car were in third place (13%). Examples of issues brought to The Motor Ombudsman for new cars, included missing equipment in the cabin, such as wireless chargers and problems with the climate control system. For used hybrids, consumers had complaints about marks on the interior trim and crashing infotainment systems.

As seen in the 2021 full-year analysis, disputes in relation to the battery and range made up the smallest proportion of complaints (i.e. 5% or less) in the first six months of the year for both hybrids and EVs. Faulty batteries, and not achieving the quoted range by the vehicle manufacturer following a full charge, including in winter, were amongst the main sources of complaints.

Overall, for the January to June 2022 period, 80% of disputes logged by The Motor Ombudsman about EVs were about new cars, with the remaining 20% stemming from used models, which would be expected, as there are currently more new EVs compared to used within the UK car parc. For complaints in relation to hybrids, the ratio was 60% new to 40% used.

When submitting their complaint, the majority of EV and hybrid vehicle owners requested a full refund of the cost of the vehicle as their preferred resolution (22% and 38% respectively), mirroring the percentage for EV customers seen in 2021, with compensation as the next most asked-for solution (21% and 19%). Rejection of a vehicle was the third most desired   outcome (20% for EV owners and 14% for hybrid owners).

Since last year, the average claim value requested by consumers to bring their complaint to a close about an electric vehicle, crept up from £10,700 to £13,745 for the first six months of 2022. This was slightly higher than the figure of £11,392 seen for hybrids, which is not unsurprising, given that EVs tend to be more expensive at the point of sale.

To view the full summary of EV and hybrid vehicle sales issues raised by consumers between January and June 2022, please refer to the infographics below. These can also be downloaded as PDF files by clicking on the titles above each infographic. 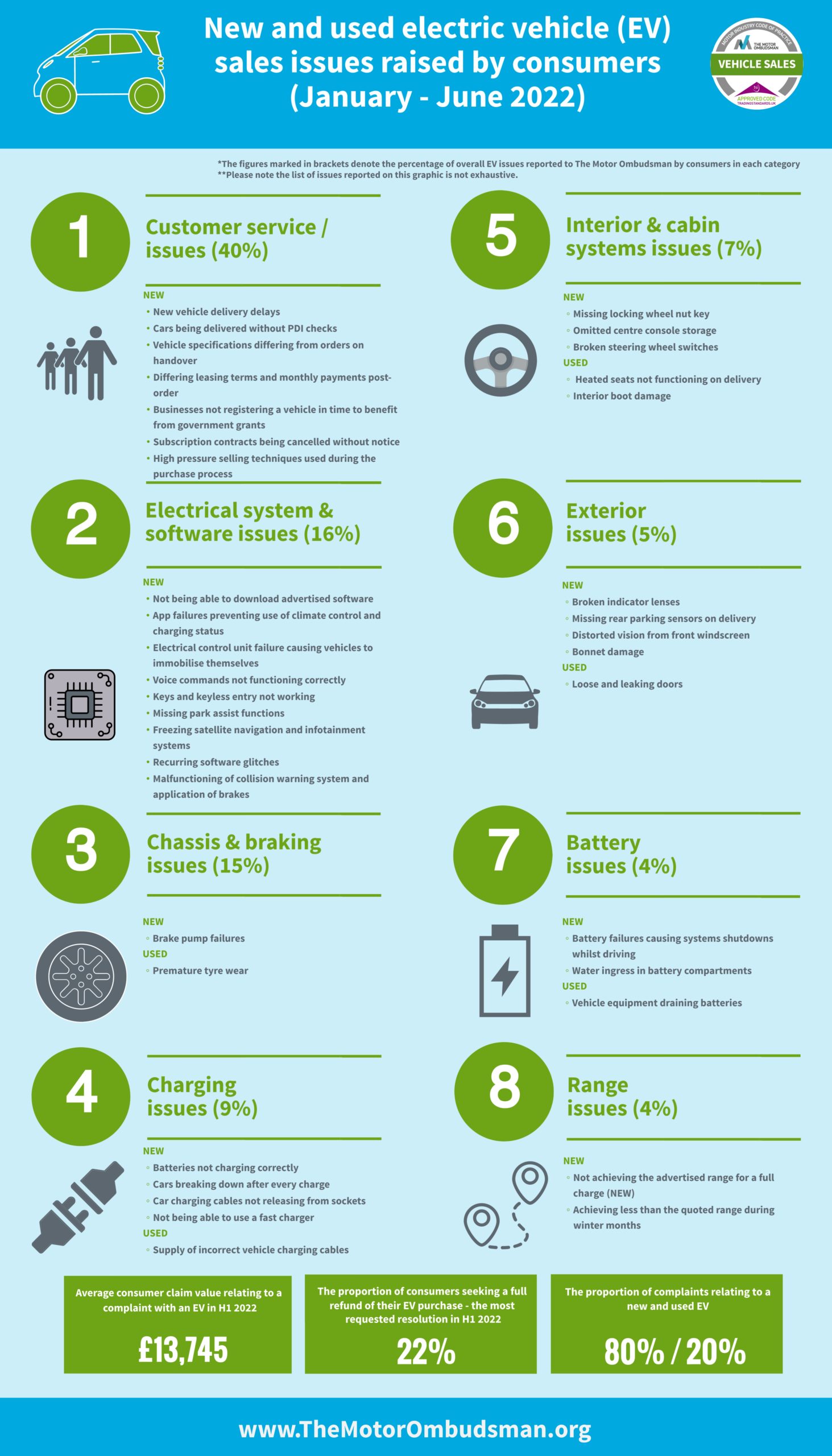 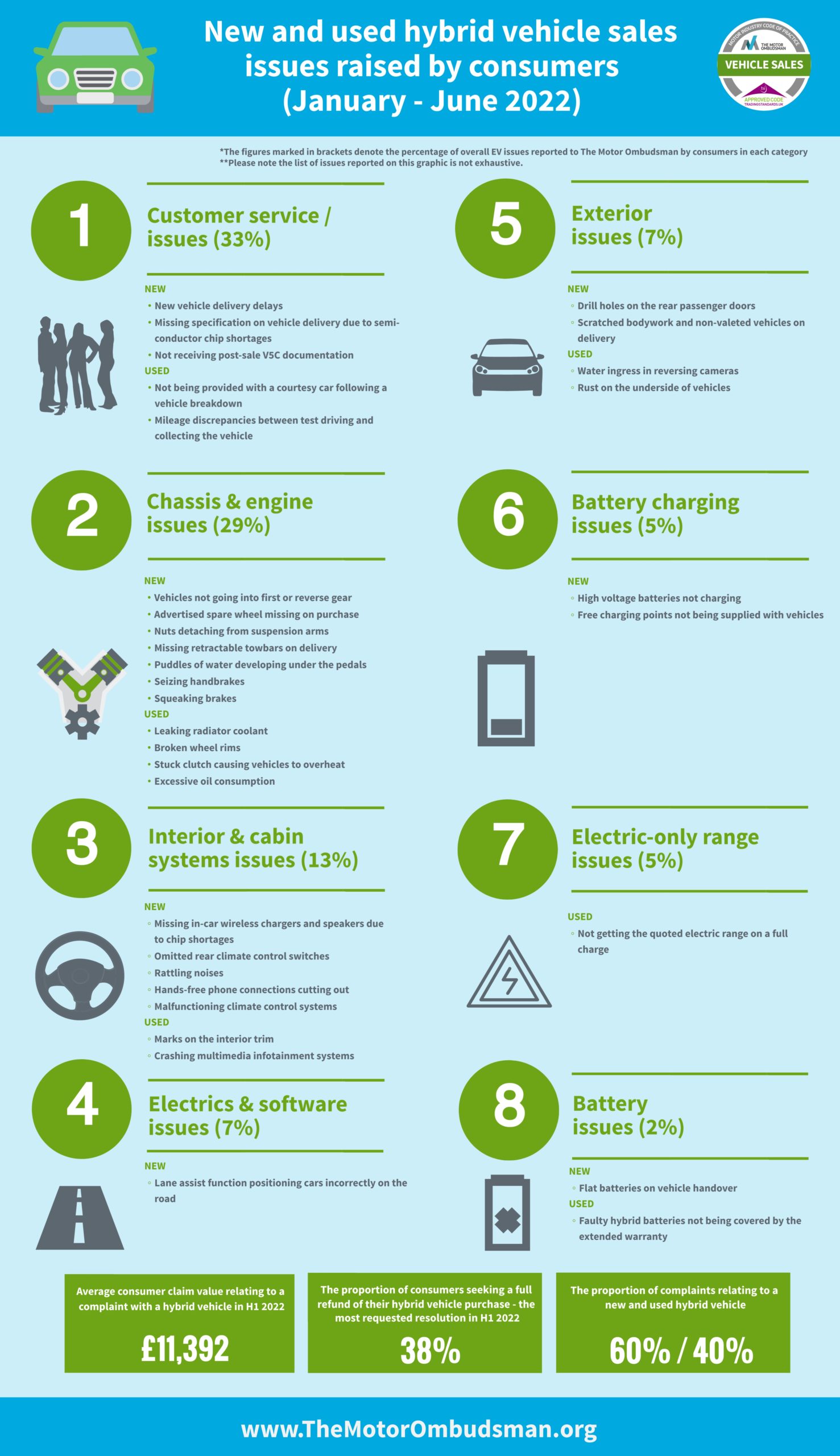