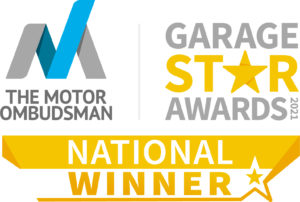 The Motor Ombudsman is pleased to announce that The Garage (Whitburn), the independent garage based in the town of Whitburn in West Lothian, near to Glasgow and Edinburgh, has won its 2021 National Garage Star Award. The Garage Star Awards were launched last year by the Ombudsman dedicated to the automotive sector, to recognise businesses accredited to its Motor Industry Codes of Practice for Service and Repair, and Vehicle Sales, as well as team members working within these organisations, who went above and beyond to provide an exceptional level of work and service to customers.

Nearly 1,100 nominations were received from motorists for individuals, dealerships and garages up and down the country, accounts which contained inspirational stories about the exceptional lengths that people had gone to when assisting them with a vehicle purchase, or when resolving an issue with their car. These entries submitted by customers were then whittled down to this year’s finalists by The Motor Ombudsman, a shortlist that was then passed to a panel of judges who had the task of collectively determining the eight regional trophy recipients, and which one of these would be crowned the overall winner of this year’s contest.

Facing stiff competition from two other businesses in Scotland, it was a nomination submitted for The Garage (Whitburn) that caught the attention of judges, and was deemed worthy to be the winner of the trophy for this region for the second year in a row. The entry from a customer, which explained their unrelenting commitment to providing the very highest level of customer service, the provision of vehicle maintenance classes for local motorists, and their charitable work and support of the surrounding community, which includes touring the town with Santa’s sleigh and hosting a grotto at Christmas, was then put to the judges alongside the other first placed finishers in the seven other regions of the contest.

After judges collectively evaluated the eight trophy winners on their respective merits, it was the Scottish trophy winner that emerged victorious to be crowned the 2021 National Garage Star, with the business also receiving £500 in vouchers in recognition of their outstanding achievement.

Ian Robertson, Managing Director of The Garage (Whitburn), said: “We are thrilled to be the recipient of not just one, but two trophies in the competition, and we are extremely honoured to have been crowned the National Garage Star. It is testimony to the hard work and philosophy of the entire team that they always look to go beyond the call of duty, and for the countless hours that they put in during their spare time to voluntarily help others and to carry out fantastic work in the community. We are delighted to end what has been a challenging year for our business with a celebration of this fantastic achievement, and we are extremely grateful to have our efforts recognised by our valued customers in the town and further afield.”

Bill Fennell, Chief Ombudsman and Managing Director of The Motor Ombudsman, added: “We would like to congratulate The Garage (Whitburn) on being named the National Garage Star, and for winning the Scottish region for a second time. Their desire to go the extra mile to help their customers and local community shone through in their nomination, and clearly stood out for all judges when pitted against the competition. We are very proud that they are a part of our nationwide accredited network, and we look forward to seeing some more great testimonials from customers in our 2022 Garage Star Awards. In the meantime, we hope that Ian and his team enjoy the celebrations as we approach the festive season.”

The eight regional winners of the 2021 Garage Star Awards were named as:

This year’s contest also saw the introduction of two new dedicated Customer Service Star Awards for the  vehicle manufacturers accredited to The Motor Ombudsman’s New Car Code and for the businesses that are a part of its Vehicle Warranty Products Code. The inaugural trophies in these categories were won by Polestar Automotive and Autoguard Warranties respectively.