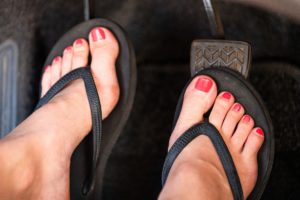 A recent online YouGov study commissioned by The Motor Ombudsman has revealed that the nation’s drivers prefer footwear that keeps their heels, soles and toes cool when getting behind the wheel. When asked about what kind of shoes they have previously turned to, the majority (54%) of respondents stated they have opted for sandals, flip-flops, or even bare feet, in some cases.

The findings from the latest poll of 1,496 UK car users have been published in conjunction with the Ombudsman’s latest “Have the right atyre” social media campaign to emphasise the importance of a car’s “footwear”, namely tyres, being in a safe and legal condition prior to holidaymakers embarking on their summer staycation.

The research saw sandals come out top when individuals were asked to pick from a list of the more unconventional types of shoes they have previously donned when at the pedals, with 42% of survey participants saying that they had put on these summer favourites. In fact, sandals also emerged as a popular choice for 60% of women. Similarly, flip-flops, synonymous with going to the beach or lounging by the pool, were called out by 20% of car users as footwear they have worn, whilst the research equally showed that just over a fifth of participants (21%) have done away completely with any form of foot covering.

Despite not being illegal according to the Highway Code*, solely having bare feet on the pedals is discouraged by the Driver and Vehicle Standards Agency (DVSA), due to individuals being unable to apply the same level of pressure on the brakes compared to when wearing shoes. In fact, those aged between 25 and 34 would be the most inclined to ditch any type of footwear when using a car, with 36% of respondents in this group saying that they have done this, with over a quarter of people (27%) in London and Wales taking the same decision to leave their shoes behind.

When asked about what else they have previously furnished their feet with when driving, just under a third of survey respondents (31%) stated that they have picked hiking boots, which also turned out to be the most common choice amongst male respondents (37%). Furthermore, poll participants confirmed that they had driven in slippers (17%), wellington boots (14%), stilettos (14%) and crocs (9%). Trainers, espadrilles, plimsoles and horse riding boots have also made the grade for some drivers when questioned about what else they have previously reached for when getting in the car.

The wide-ranging footwear preferences of drivers echoes another key statistic from the poll, which is that just over half of UK car users (54%) grab whatever shoes they have to hand before getting behind the wheel. Around a quarter (26%) said that they select them based on the length of the journey ahead, with less than a fifth (15%) saying that they have specific driving shoes that are comfortable and safe to use.

Bill Fennell, Chief Ombudsman and Managing Director of the Motor Ombudsman, said: “It has been eye-opening to see just how diverse the type of footwear is when people go driving. However, the serious underlying message that we are communicating during our latest campaign, is that both the driver and car should be dressed in the right attire for driving, especially at a time when travelling by car to a staycation destination is proving especially popular. What is on your feet, and what condition your vehicle’s tyres are in, are two very important safety considerations, and neither should be overlooked when going away on holiday, or indeed, all year round.”

*Rule 97 of the Highway Code states: “Before setting off. You should ensure that clothing and footwear do not prevent you using the controls in the correct manner.”