The Motor Ombudsman’s Knowledge Base, the online resource that provides responses to some of the most common queries from motorists on car ownership, vehicle maintenance and dispute resolution, has recorded over 500,000 articles views in a single calendar year for the first time since launching at the beginning of 2019. A total of 527,902 views were seen during 2021, a 101% increase on the volume logged the previous year (262,723), as the tool becomes referred to by an ever-greater number of visitors to The Motor Ombudsman website. This means that, in the first three years since being unveiled, there have been just over 936,755 article views up to 31st December 2021.

The third quarter proved the busiest three months of 2021 for the Knowledge Base, accounting for 31% of the overall traffic. Mirroring the trend seen in 2020, the questions around whether a vehicle can be returned within the first two weeks of purchase, and whether it is possible to get a refund after buying a car, were the two most popular reads during the past 12 months.

The question around what the Consumer Rights Act 2015 legislation is, and how it affects a vehicle purchase, was read by more individuals in 2021 compared to the previous year, rising two places in the top 10 most consulted articles to third position. The Q&A highlighting what steps a customer is able to take if they have been sold a faulty car became an even more prominent subject amongst consumers, rising from eighth spot in 2020 to fourth in 2021. Rounding off the top five most read articles in 2021 was on the service and repair topic of what action an owner is able to take if they deem a garage to be taking too long when working on their vehicle.

Furthermore, in the ten most frequented articles last year, there were two new entries, namely the car sales question about how many vehicles a person can sell privately before being considered a motor trader (at sixth place), and what to do if a consumer discovers a fault with their car whilst still under warranty (in eighth place).

In terms of the search volume on the Knowledge Base, a total of 80,140 enquiries were conducted during the year, which was below the previous milestone of around 88,773 set in 2020. However, the volume was nearly double that witnessed in 2019 (47,458). 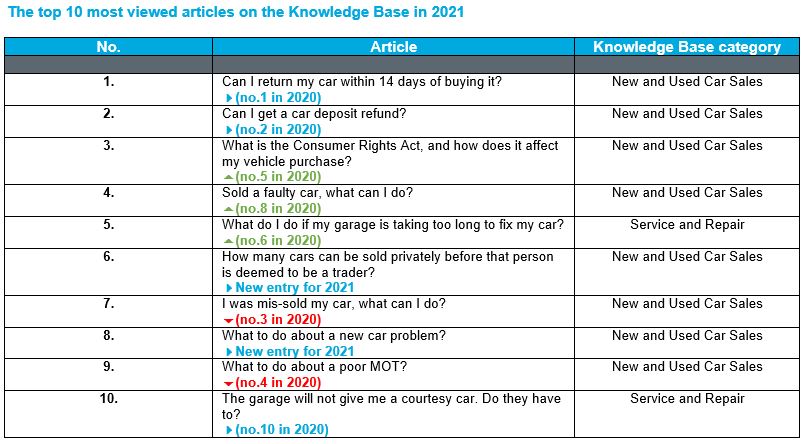 There were nearly 160,500 article views recorded during the final three months of 2021. Q&As within the New and Used Car Sales category of the Knowledge Base continued to head the top 10 classification, with “Can I return my car within 14 days of buying it?” and “Can I get a car deposit refund?” retaining the top two places for the quarter. The Q&A regarding the definition of the Consumer Rights Act, and what to do if a car develops a fault when within the warranty period, climbed one place respectively as they became more sought-after articles in the fourth quarter versus the preceding three months. 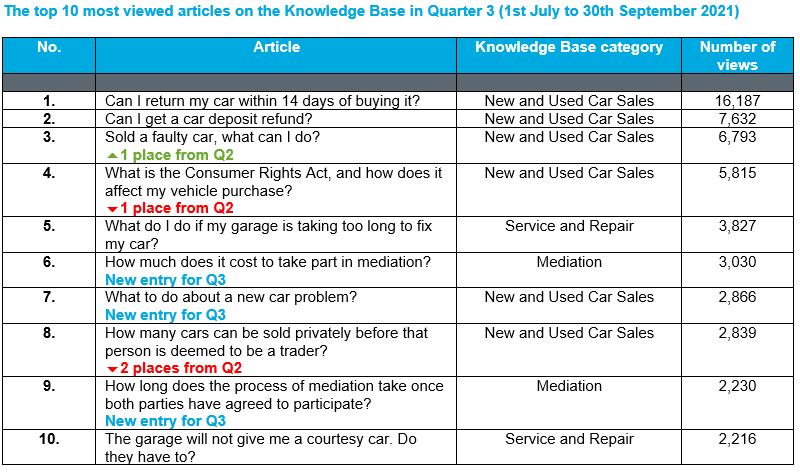 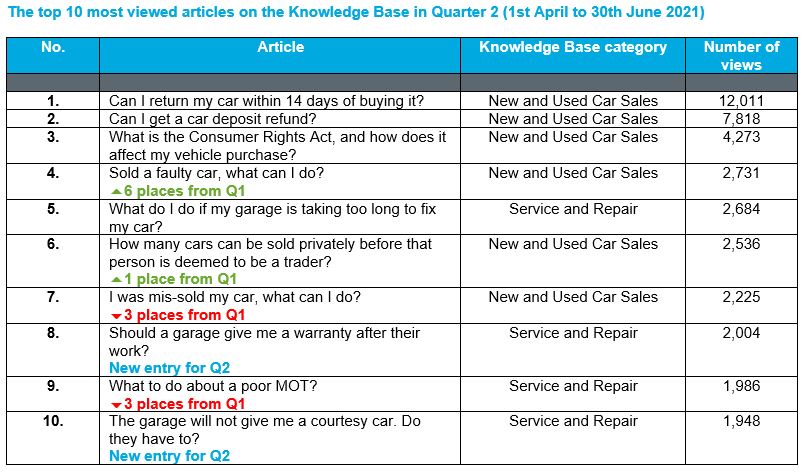