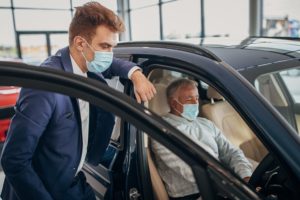 A YouGov study commissioned by The Motor Ombudsman has found that the majority of drivers remain hesitant to swap bricks-and-mortar for the internet when it comes to buying either a new or used car in 2021. The poll of 1,873 UK drivers by the Ombudsman dedicated to the automotive sector revealed that, if they were to purchase a vehicle this year, around six in ten respondents (62%) would opt to visit a showroom in person, rather than turn to the internet for a completely virtual experience.

The principal reasons cited by those who were less inclined to buy a car from start to finish using the web, were namely, not being able to get behind the wheel of the actual vehicle being purchased to assess whether it met their requirements (85%), needing to rely on third party photos, reports and documentation to determine the condition of a car (73%), having to do more research to ensure that it was being supplied from a legitimate source (45%), and concerns about not having the opportunity to enter into negotiations regarding the price of the vehicle (41%).

Furthermore, the poll showed that female drivers were slightly less keen (67%) to resort to an online transaction compared to their male counterparts (58%), with over 55s (73%), and those living in the south of England (67%) the least likely to turn to a computer or handheld device when it came to acquiring a brand new or second hand car in 2021.

Conversely, from the 33% of respondents who said that they would be comfortable with ordering and paying for a car at the click of a button, the majority (67%) said that buying “at a distance” gave them the ability to shop around and compare prices more easily than when visiting a seller’s premises, and that it granted a greater degree of freedom through not being restricted to retailer opening hours or temporary closures (61%), whilst 60% said that there may be more choice compared to what can simply be seen on the forecourt. In fact, 18 to 24-year-olds would be the most likely to entertain the idea of going online to buy a car, with nearly half (45%) saying that they would consider doing this.

In addition, when asked what age of car individuals would purchase if they were to buy a vehicle on the web during 2021, just under a fifth (18%) would look for one that was between two and three years old, with people least likely to get a car that was between four and five years of age (8%).

Commenting on the findings of the study, Bill Fennell, Chief Ombudsman and Managing Director of The Motor Ombudsman, said: “Our research has shown that, despite online shopping becoming an even more talked-about phenomenon during the pandemic, visiting a showroom in person, and seeing and trying the vehicle for themselves, is the overriding preference for the majority of drivers if they were to buy a new or used car this year. A completely digital purchase process from beginning to end is clearly proving to be too big a step for most, but what our research has highlighted, is that there is demand in the vehicle sales sector from motorists for a more physical and tangible experience, as well as for one that is purely virtual from start to finish. This means that there’s no one-size-fits-all approach if the needs of consumers are to be successfully catered for by retailers when selling cars in 2021 and beyond.”

For more information on The Motor Ombudsman, visit www.TheMotorOmbudsman.org.