The Motor Ombudsman’s online Knowledge Base has made a strong start to the year, recording the highest ever number of views and searches in a single quarter since the resource was launched in January 2019. During the first three months of 2020, there were a total of 51,660 article views across all categories on the Knowledge Base and 11,728 searches. This represents a respective 15% and 11% increase versus the statistics seen in the final quarter of 2019, and was partly assisted by the introduction of a new category on Coronavirus-related motoring queries.

The most read article between January and March was the question about whether a consumer is able to get a refund for a deposit that they had placed on a car, attracting just over 3,800 reads. This also proved to be one of the most frequently referred to articles throughout the whole of last year. The most viewed Service and Repair Code question was namely “The garage has not fixed the problem with my vehicle, what can I do?”, with nearly 1,100 views seen during the first quarter. This was followed by “The garage has damaged my car or property, what can I do?” (with just over 1,000 reads).

The most popular generic search terms used during the first quarter of 2020 included “warranty”, “faulty” and “engine”. Other queries entered into the Knowledge Base search bar were about having to pay to cancel a service plan, why a certain make and model still has steering issues after 10 years of ownership, and what action the consumer could take as they were unhappy with their garage. 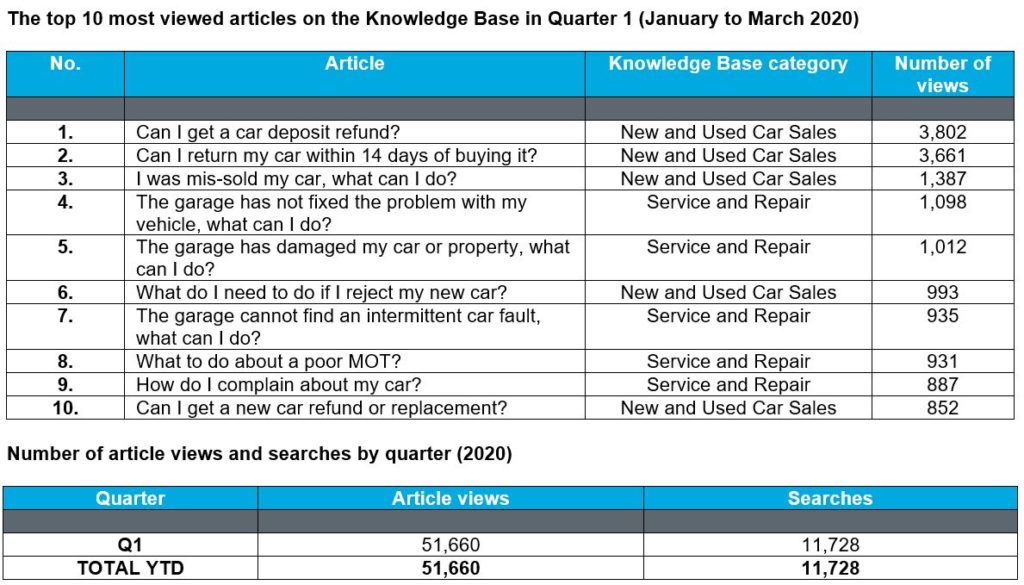